The Vital Question, by Nick Lane 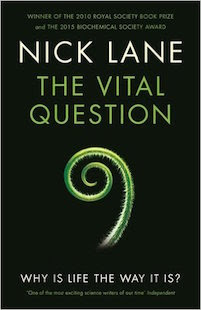 “In the end, respiration and burning are equivalent; the slight delay in the middle is what we know as life.”

This quote, from Nick Lane’s book The Vital Question (2015), is both poetic and true, which is the mark of great popular science writing. What Lane’s book attempts to do (and in my opinion succeeds in doing) is to radically change our perspective on life by showing us the crucial role played by energy.

Lane is a biochemist at University College London and already the author of three books. I think there’s something to be said about popular science written by scientists, as opposed to science journalists, in the sense that they can sometimes achieve much more than educating. For example, they can fundamentally change our understanding of some topics (that certainly happened to me on some occasions). Actually, reading The Vital Question reminded me of reading Richard Dawkins’ The Selfish Gene many years ago, and Lane’s book did for me with biochemistry what Dawkins did with genetics and evolutionary theory: it opened a window into a fascinating new landscape.

The universal proton-motive force
The Vital Question offers new glimpses into two of the most fundamental questions about life: why do all life forms use ion gradients to produce energy, and why eukaryotic cells are the way they are [1]. Now this is quite a programme! And Lane does a terrific job at presenting us with some of the best past and present ideas that were put forward in the field (including some of his own).
Regarding the first question, Lane writes (p. 65):


“Life could have been driven by thermal or mechanical energy, or radioactivity, or electrical discharges, or UV radiation, the imagination is the limit; but no, all life is driven by redox chemistry, via remarkably similar respiratory chains.”

In discussing the vital and universal role of the proton-motive force in living organisms, which generates ATP (the energy ‘currency’ in the cell)  thanks to a gradient of protons across membranes (see representation of ATP synthase below [2]), Lane pays tribute to Peter Mitchell, the Nobel laureate who first proposed the concept in the early 1960s, which he then called the ‘chemiosmotic hypothesis’.  I was very interested to learn about Mitchell, since as a biology student I was only introduced to the concept of proton-motive force, not to its history or its discoverer. And as Lane notes (p. 68), it was once called ‘the most counterintuitive idea in biology since Darwin’ by the biochemist Leslie Orgel.

In that context, I  was amazed to learn that fermentation, which I thought was some kind of ‘primitive’ way of obtaining energy, is most probably a more recent invention than the proton-motive force! (p. 168)

The origin of life
Lane delves into hypotheses on the origin of life with great detail in the second part of the book. It starts with the old ‘primordial soup’ theory that was first proposed by J. B. S. Haldane in 1929 and received support from the famous Miller experiment (published in 1953, the same year as Watson and Crick’s paper on DNA). Miller showed that organic molecules such as amino acids can be formed by the action of lightning on simpler gases like methane, ammonia and hydrogen. Life, the theory posits, would have evolved from those early organic bricks, after they were concentrated by evaporation of tidal pools or by adsorption to inorganic surfaces. As Lane notes, this theory is probably not true, and he explains that the favored explanations now involve deep-sea hydrothermal vents as primordial life incubators. This theory was prominently developed by Bill Martin and Mike Russell in the late eighties and in the nineties, and summed up in papers in 2003 and 2008.

In particular, Martin and Russell have pointed at alkaline deep-sea vents as a possible original cradle for life. In such vents, they argue, exist unique geochemical conditions that could have been the biochemical template for the metabolism of the first living cells. For example, in these vents CO2 is abiotically reduced by H2 into methane (CH4), which is also the reaction that powers autotrophic prokaryotes known as methanogens. In addition, alkaline vents harbor strong pH gradients (i.e., proton gradients) between the alkaline interior and the more neutral seawater, as well as porous structures. And this brings us back to chemiosmotic coupling. Martin et al. note (2008):


"Accordingly, it has been suggested that the ability to harness a continuous and naturally existing proton gradient at an alkaline hydrothermal vent is older than the ability to generate a proton gradient with a chemistry that is specified by genes. [...] Regarding the question of which came first, there are two simple possibilities: either energy-consuming pumping or energy-conserving chemiosmotic harnessing came first."

Martin and Russell favor the latter scenario. The reason why chemiosmotic coupling is universal in living organisms could thus be that early life evolved to use those preexisting proton gradients from deep-sea vents! This, however, is not necessarily how life came to be... But it is an exciting idea that deserves our full attention. As far as I'm concerned, it is still the best hypothesis for the origin of life that I have read.

In a follow-up post, I will write about the last part of the book that discusses the origin of complex (eukaryotic) life.


Notes
[1] Incidently,  it reminds me of that curious saying: ‘Science does not answer why questions, only how questions’. This is clearly untrue. Science often deals with ‘why’ questions, in particular questions pertaining to evolution. I’m not sure why this misleading saying persists, including among scientists…
[2] Almost all cells use protons, but apparently some anerobic prokaryotic species use sodium ions instead.