When a bacterial infection is treated with antibiotics, bacteria that are in a so-called dormant, inactive state may escape death – this because antibiotics only kill growing bacteria. It becomes a serious problem when these sleeping beauties start to grow again, in particular when they do so after the period of antibiotic treatment has ended… Thus, an infection that was apparently cured could be followed by a secondary infection days or weeks later. This problematic phenomenon is called bacterial persistence, and it should not be confused with bacterial resistance, in which growing bacteria are immune to one or several antibiotics.

Now what about indole? (The molecule displayed on top of this post.) Actually indole is present in very common and important biomolecules, such as the amino acid tryptophan, the animal hormone serotonin and the plant growth hormone auxin. We have known for more than a century that E. coli produces indole in stationary phase (Lee, 2010), and it does so thanks to an enzyme called tryptophanase, which cleaves tryptophane into indole, pyruvate and ammonia.

But E. coli is not the only bacterium capable of that: more than 85 species (both Gram-negative and Gram-positive) can synthesize indole (Lee, 2010).  For a long time the biological functions of indole were overlooked, but now we know that indole can act as an extracellular signal and can for instance increase antibiotic resistance and control biofilm formation in E. coli.

Are all our modern health issues linked to our microbiome?

The human microbiome is definitely the sensation of this Summer 2012. [Kind of a Carly Rae Jepsen for science!]

In June alone, our microbial inhabitants were featured on the cover of Scientific American (watch their beautiful infographics), Nature, Science and Microbe…

The Human Microbiome Project (HMP), a $170 million research consortium funded by the US National Institute of Health (NIH), just released two reports in Nature accompanied by fifteen publications in PLoS ONE. The consortium, strong of about 200 researchers, studied the diversity of microbes inhabiting the body (skin, mouth, nose, gut, urogenital tract) of 242 healthy people, using new sequencing technologies to catalog the microbes.

The bottom line? Microbial diversity is very high between healthy individuals. It is therefore impossible to define a typical ‘healthy’ microbiome. In a way, every individual develops his/her own personal set of microbes. The diversity, however, is not totally random and patterns are clearly present in various areas of the body.

Read more »
Posted by Robin Tecon at 7:18 PM No comments:

Email ThisBlogThis!Share to TwitterShare to FacebookShare to Pinterest
Labels: in the news

This is a short follow-up post about the bacteria from Mono lake (California) that allegedly incorporate arsenic instead of phosphorus in their DNA.

The journal Science just published two papers on the topic. The first report is from Rosie Redfield's lab in Canada, the second from Julia Vorholt's lab in Switzerland. Together, they claim that the arsenic bacteria in fact must have some phosphate to grow, and that arsenic is not incorporated into DNA—thus refuting the main conclusions of the original arsenic bacteria paper.

I only read the abstracts so far, but at first sight it seems to bury the arsenic story for good... It's not that often that we see researchers repeating someone's experiment to challenge it, so Redfield and Vorholt should be praised for the effort.

Posted by Robin Tecon at 7:39 PM No comments: 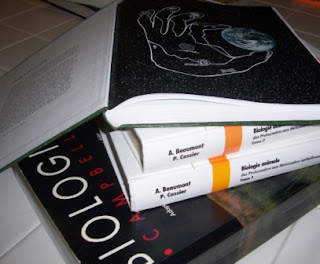 I view taxonomy – the classification of organisms – at the same time as the most useless and the most useful science. Useless because we know that all life forms are related to one another, and therefore the categories that we create to separate them are arbitrary (with the exception of the distinction at the species level). Most useful, since naming and organizing things seem necessary if we are to claim any knowledge. And isn't it a true pleasure (I almost dare to write "bliss") to point at a plant, a mushroom or an animal (if the latter doesn't move too fast) and be able to name it?

I learned my share of taxonomy as a student, but I also forgot quite a bunch… At least I remember that I got a good grade at my zoology exam (I had to talk about the subphylum Chelicerata!), based on a course by one of the best professors I ever had, Peter Vogel.

Taxonomy, which is part of Systematics (the study of biological diversity), proposes a hierarchy from the most particular to the most general: Species, Genera, Families, Orders, Classes, Phyla… (In the classic evolutionary taxonomy, classification is mostly based on morphology, while modern molecular systematics compares the sequence of amino acids in proteins or of nucleotides in nucleic acids.) But, what about higher (more global) levels of classification?