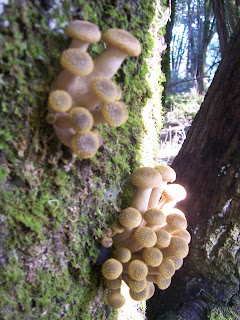 In the lab I have only dealt with microscopic fungi, such as yeasts, but a couple of weeks ago I had the privilege to accompany a group of UC Davis students and staff on a mushroom hunting trip! This excursion was led by the very knowledgeable mycologist Dr. Mike Davis, author of the Field Guide to Mushrooms of Western North America, and Professor of Plant Pathology at UCD.

Fungi are curious organisms, neither animal nor plant, with unique chemical traits such as the presence of chitin in the wall of their cells. My beloved Brock Biology of Microorganims reminds me that there are three major groups of fungi: the molds (the type you don't want in your household); the yeasts, which we commonly use to ferment sugars; and finally the mushrooms, or macroscopic fungi.

Both molds and mushrooms produce spores in order to propagate, but the big difference is that mushrooms form fruiting bodies to do so. These macroscopic structures are large, complex, and sometimes tasty! And it's quite amazing to realize that a trite mycelium can give birth to such delicate structures...

Most mushrooms belong to the group Basidiomycetes, although some notable exceptions are found. (The delicious morels, for instance, are Ascomycetes; morels thus belong to the same group as yeasts).

As any mushroom gatherer knows, specific (wet) conditions are needed if one hopes to fill the basket. And if favorable environmental conditions are there, mushrooms can pop out very rapidly! It is interesting to realize, however, that a mushroom spends most of its life as a tiny mycelium in the soil and goes totally unnoticed.

Here's a few more pics because mushrooms are so nice:

Email ThisBlogThis!Share to TwitterShare to FacebookShare to Pinterest
Labels: general and definitions