Our new publication is out there as an early view in Environmental Microbiology, and I shamelessly take this opportunity to write about it here!

Here's the story. The plant foliage is colonized by a crowd of microbes (with bacteria on the front line—up to 108 bacteria per gram of leaf has been reported!). Some of them can be pathogenic, hence a threat, but most of them are harmless or even favorable inhabitants of the plant ecosystem.

Bacteria form large clusters (aggregates) of cells on the surface of leaves, but the mechanism of formation of such structures is not very well understood. What we want to know is how these bacteria grow and colonize this specific environment at the microscale, that is, at their own scale.

First, bacteria have to land on the leaf. Wind, rain, insects can all contribute to bring microbial visitors onto the leaf surface (what we call the phyllosphere), usually few cells at a time. Once on the leaf, these immigrants will grow at the expense of the plant sugars available on the leaf and, if the conditions are favorable, rapidly multiply to form clusters of up to thousands of cells. Do these clusters result from the random aggregation of cells or do they result from the reproduction of a single bacterium? The two mechanisms—that we call aggregative and replicative—are fundamentally different but not necessarily mutually exclusive.

Thanks to fluorescence microscopy it is possible to visualize glowing bacteria on the surface of a leaf. One difficulty, however, is that we cannot follow the same microarea of leaf overtime… We are limited to a snapshot view, and so it's impossible to decide whether a given cluster was formed through aggregative or replicative behavior. For this reason we developed techniques that would enable us to deduce a posteriori what was the mechanism of formation.

The first technique that we used is a combination of green and red fluorescent bacteria (our pet bacterium Pantoea agglomerans, a natural inhabitant of the phyllosphere, expressing either a green or red fluorescent protein). The trick is simple, but necessitates starting with single cells on the surface of the leaf: if clusters are formed via the replicative mechanism (B), we should see clusters of one color only; if the mechanism is aggregative (A), bicolor clusters will predominate. 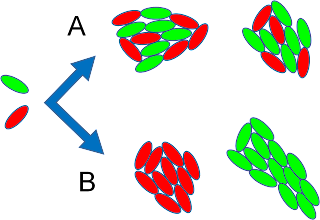 After one day of incubation on a bean leaf (Phaseolus vulgaris, the green snap bean), we observed both type of clusters, mono- and bicolor! What it suggests is that both mechanism happen on the leaf. 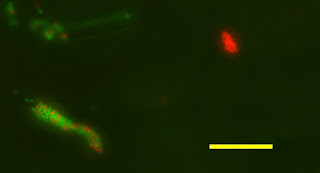 The second technique that was used is based on bacteria that progressively lose their fluorescence intensity as they grow. These bacteria, which act as a bioreporters for reproductive success, was previously used by my colleague Mitja Remus-Emsermann to study the fate of individual bacteria exposed to the leaf environment. This is illustrated in the image below.

Thus, if the replicative mechanism is predominant, an increase of cluster size should always be accompanied with a proportionate reduction of fluorescence per cell in that cluster. What we showed is that after a couple of hours on the leaf surface, this rule was not respected: many single cells had seen their fluorescence decreased, suggesting that they were dividing but not staying together as clusters!

To sum up, our results suggest that both mechanisms (replicative and aggregative) take place in the phyllosphere, and that bacterial colonization at the microscale is a very dynamic process.

In addition, I would stress that such bioreporter techniques could be equally useful to address questions in other natural habitats. If you carefully select the type of bioreporters and settings, you can go beyond a mere descriptive study. You can tackle specific problems and do quantitative analyses. I hope that our paper will inspire other bioreporter studies in soil, sediments, or even animals!